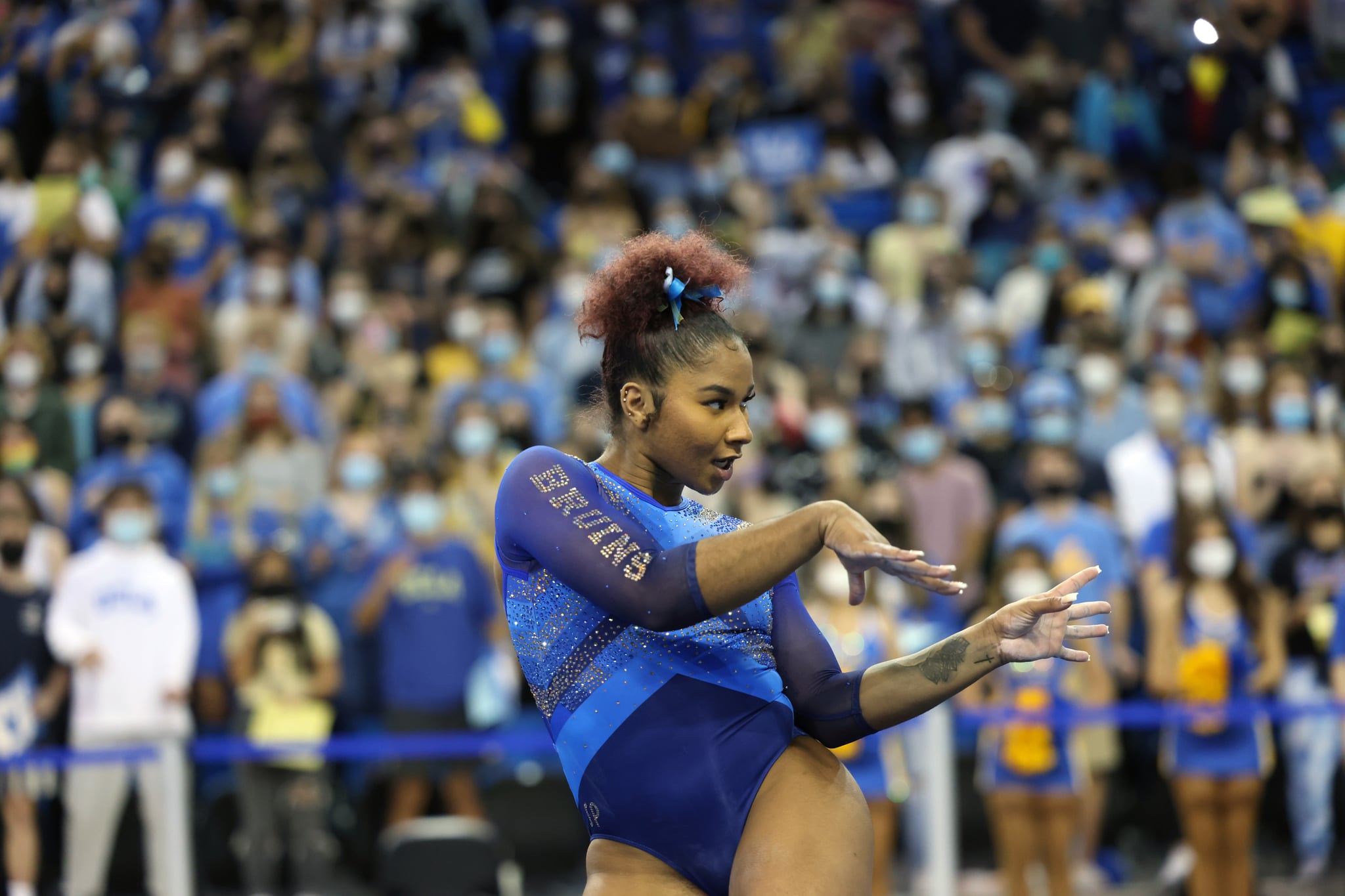 Jordan Chiles earned the first perfect 10 of her NCAA gymnastics career on Feb. 4 when she competed floor for UCLA. But it wasn’t just any floor routine: it brought all the fun and personality, featuring songs by Lizzo, Normani, and Doja Cat — a different type of performance than her superhero-themed routines from the elite world. (Remember: collegiate routines are scored out of a 10.00, while those on the elite level have had a different scoring system since 2006 that goes beyond a 10.00 due to combined execution and difficulty values.)

In the routine, seen below, Chiles opened up with a soaring double layout, and shined with choreography coordinated by BJ Das. You’ll hear Doja Cat’s “Boss B*tch,” Lizzo‘s “Truth Hurts” and “Rumors” (the latter featuring Cardi B), and Normani‘s “Motivation.”

When speaking to POPSUGAR last year ahead of the Gold Over America Tour, Chiles reflected, “[W]hen ‘Motivation’ came out, I was like, ‘You know what? I’m going to use that as my floor team in college.'” She also mentioned that she was trying to think of ways to incorporate the superhero themes she’s known for — Wonder Woman and Spider-Man — into her freshman floor routine, which she may have done with her “Superwoman” dive roll before the last tumbling pass (a double pike).

Lizzo herself retweeted ESPN’s footage of the routine with the message: “MAKING 👏🏾BLACK 👏🏾HISTORY IN BLACK HISTORY MONTH! YESSS.” When Chiles replied in disbelief, the singer wrote back, “u are a SUPERSTAR.”

Chiles fell to the floor when she found out she’d scored a 10.00, clearly full of emotion, and her fellow Bruins were there to surround her with cheers. At the same competition, Chiles’s former Olympic teammate Grace McCallum also received her first 10.00, showcasing a beautiful bars routine. And on Feb. 5, another Team USA alumna who joined them at the Olympics, Suni Lee, got her own perfect mark on bars. Transitioning from the elite world to collegiate gymnastics isn’t an easy feat, but they all seem to be fitting in quite well.

Chiles’s accomplishment comes amidst some turmoil within the UCLA gymnastics program. Team coaches and leadership reportedly failed to address the use of racist language; the freshman that allegedly used said language since transferred to LSU. During a meet on Jan. 30, where Chiles debuted her new floor routine, senior Norah Flatley said in a post-meet interview that the new team motto is “resilience.” Pac-12 Networks’s Jim Watson did not specifically mention this mishandling, instead calling out “drama and challenges and injuries.” Flatley said, “Anything that we’re thrown at, we’re strong enough to get through it as a team, and we’re gonna keep pushing till the end.”